Chalk art is an amazing tool to share the Gospel in this day of media. People remember 70-80 percent of what they see over 20-30 percent that they hear and read. The chalk artist uses this to his advantage and draws a picture that people will remember for a lifetime. Having a Gospel message to go along with it helps the viewer to remember both the picture and the message!

We find that people that would not normally come to church or sit through a regular preaching service will come and hear the Gospel while watching a chalk talk. Young and old alike love the artwork being done while the message is being given and have it climax at the end to reveal a hidden black light drawing.

Many Gospel chalk artists have contributed to the styles and methods we use today. Drawing while talking is as "old as the hills." Down through the ages, people have used drawings in attempts to communicate. Some statistics show that people remember eighty percent of what they see versus only twenty percent of what they hear. The chalk artist used this learning principle to his advantage when explaining spiritual truths.

Some things that are difficult to explain in words may be better conveyed with a picture. In John 8:4-11 the Lord Jesus Christ was met with a grave situation involving a woman caught in adultery. By the Old Testament Law, she was to be stoned. She was brought to Jesus by a mob big enough to carry out such a punishment.

In response to the angry crowd, Jesus stooped to the ground and began to write something in the sand. We are not told what He wrote, but it changed the heart of everyone there. This phenomenon is called the "power of the pen."

Throughout Scripture God gives us metaphors and illustrations to teach lessons and communicate ideas more fully. Jesus said, "I am the good shepherd" (John 10:11a) and "I am the true vine" (John 15:1a). "Ye are the light of the world. A city that is set on a hill cannot be hid" (Matthew 5:14). Jesus often spoke in parables to His followers in order to communicate His message.

The chalk artist draws a picture to bring a truth to life. People will often watch a chalk drawing and hear a presentation of the Gospel that they might not have otherwise heard. 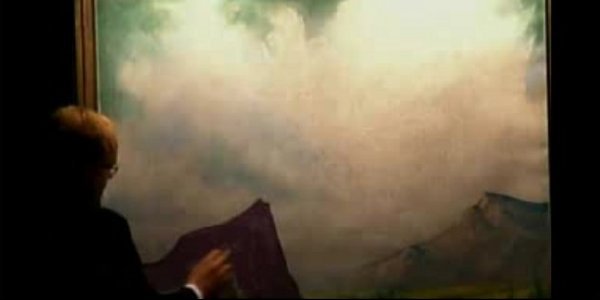